The City of Baltimore has chosen OneScreen as the Technology Standard for all city school buildings. OneScreen won Baltimore's approval in a peer-to-peer comparison of interactive smart screens for accelerated learning, both in and beyond the classroom. Baltimore schools will begin installing interactive touchscreen flat panels for teachers and students to use all across the city.

To build a future generation of leaders, Baltimore schools are providing their students with access to the very best technology and skills that will be essential for life in the 21st century. One key component of that plan is to install OneScreen interactive smart screens in classrooms throughout the city. Today's announcement of OneScreen as the definitive 2020 Classroom Technology Standard for all 21st Century School Buildings provides the basis for a host of related classroom improvements and teaching resources provided by the City of Baltimore.

Nearly a decade ago, in 2010, a joint initiative, the Maryland Stadium Authority and Baltimore City Schools came together to form the 21st Century School Buildings Plan. In the summer of 2018, OneScreen proved that it offered the most valuable technological solutions to Baltimore educators in a one-to-one competition against a rival brand. Based on the success that Baltimore schools have had with OneScreen, resulting in the rare agreement and enthusiastic support of teachers, students and administrators throughout the city, the Baltimore City School IT team and the General Contractor are taking the next step. As the new technology standard for school buildings in the City of Baltimore, OneScreen's interactive smart screens are being introduced into more than 190 schools and district offices.

OneScreen's Regional Sales Representative, Robyn McGregor, responded to the news emotionally, saying, "We are honored more than we can express to champion Baltimore's teachers and administrators, who are dedicated to fulfilling the mission of the 21st Century School. Baltimore is home for me and my kids, so this project is a bit more personal than most. It's so encouraging to work with people who care enough to put children first and provide what they need to succeed in the years ahead. When I look at all that the Baltimore team has already accomplished, I am just so thankful that they brought OneScreen on as a valued contributor to their mission."

Over the past few years, McGregor has worked to build a strong relationship with Baltimore City Schools and oversee the provision of professional installations, reliable accessibility, and on-site training for teachers and administrators. She has made it her priority to demonstrate OneScreen's ease of use and integration with existing schoolroom technology. Thanks to OneScreen, Baltimore City School classrooms are now able to say goodbye to the headaches of old-world teaching tools like projectors and second-hand computers. Too much time, energy and money has been wasted in replacing fragile bulbs, paying for maintenance on legacy equipment, waiting for tech help to arrive, and many other frustrations of outdated equipment. Children weren't able to learn about the world today using failing machinery from the past.

Much of today's classroom tech doesn't need to be installed. It can be rolled in on a cart and hidden away when not in use. OneScreen provides a simple, all-in-one, reliable smart screen that performs the duties of an interactive whiteboard, a projection screen, a giant Android tablet with access to the latest apps, a central site for taking polls in real time, a stage for sharing show-and-tell from all over the world, and a cutting edge presentation tool that integrates with Chromebooks, laptops, and many other devices.

What teachers and administrators often say adds unlimited value to the OneScreen technology, though, is the personal help in getting the most out of the smart screens. Unique among smart screen providers, OneScreen offers unlimited, free, online help and support. No tech support on site at the school? No problem. The Screen Skills Gurus are on call to help resolve any issue, before, during and after class.

"All eyes are on Baltimore right now," McGregor said. "Both the city and OneScreen are working together to show the world that all children deserve the best that we can give them. It's their world that we are just holding in stewardship for the moment. Baltimore's classrooms should serve as a showcase of what's possible and what happens when we collectively invest in the next generation."

When collaboration technologies work together, organizations can realize the benefit of people working together. OneScreen Hubware and software solutions facilitate the way collaborators need to flow between work tools and access a variety of content, data, and people to be continuously productive. Headquartered in San Diego, California, OneScreen has offices in the United States, Pakistan, Colombia, Mexico, U.A.E. and Canada. All of your collaboration tools are right here. Learn more at OneScreenSolutions.com or our Facebook and Twitter pages.

"Both the city and OneScreen are working together to show the world that all children deserve the best that we can give them. It's their world that we are just holding in stewardship for the moment." 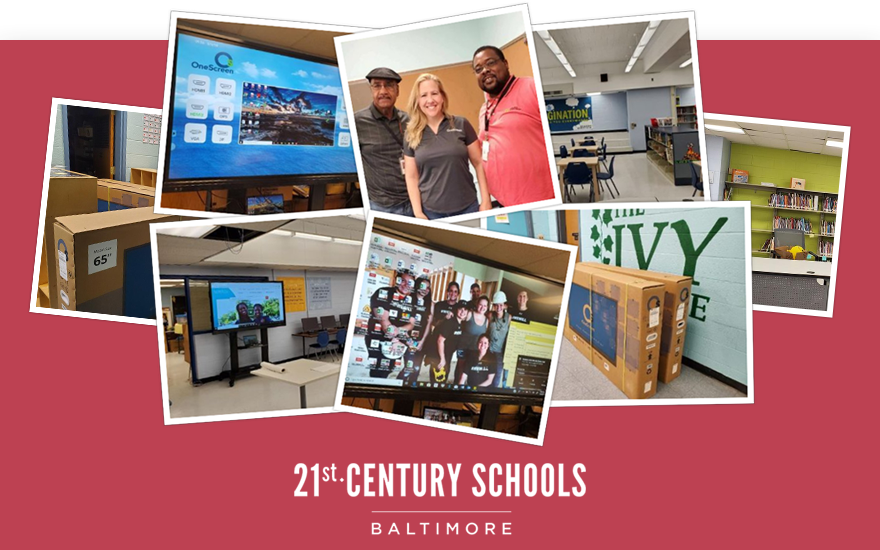