Update: This funding was signed into law on 12/28/20. $54 billion will be available for  K-12 schools to cover costs including upgrading technology and equipment to reduce the risk of spreading COVID-19. Funds will be distributed to districts following the Title I formula, based on the number or percentage of low-income children.

In the spring of 2020, the US Congress made $30 billion available for the education sector as part of the CARES Act. The HEROES Act, proposed in May and revised in October, would have allocated much more for schools, but this bill was never signed into law. However, a new bill with $900 billion for coronavirus relief funding, including a round of $54 billion in funding for K-12 schools, is on track for approval in Congress in the final days before the end of the year.

When the CARES Act came out, Congressional leaders said the funding was specifically designed to help schools with stabilizing budget shortfalls and gearing up to face the pandemic. About $13 billion was set aside for K-12 schools and another $3 billion for state governors to direct toward public or private education at their discretion. 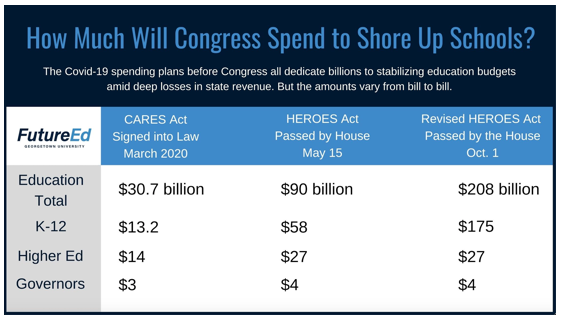 Unclaimed Funds from the CARES Act

When the CARES Act was first passed, it was not clear exactly how that money should be allocated. Educators were under pressure to rapidly generate online education programs without any guidance on when it might be safe to reopen their doors.

One of the outcomes of this was that when the school year ended in June, the US Government Accountability Office (GAO) reported that schools in all 50 states had accessed less than 1% of the money set aside for them.

There was speculation that educators were reluctant to spend until they knew what would happen with the possibility of additional funding from the HEROES Act. If more funding was coming, it would change the timing and priorities of district leaders in their plan for the year ahead. As it turned out, additional funding proposals fell through just as local governments were collecting less taxes due to the widespread business shutdowns and the economic fallout.

"By the end of November, it appeared that only $1.6 of the original $13 billion for K-12 schools had been claimed, but that was only part of the story."

Leaders in the education sectors pointed out that the GAO report was not fully up-to-date due to the multi-layered and complex process of how school boards receive funding from their state offices vs. how those funds are accounted for at the federal level. In any case, by the end of November it appeared that only $1.6 billion of the original $13 billion for K-12 schools had been claimed, but was only part of the story.

Why Some School Budgets Disagree with Federal Databases

Judith Marte, chief financial officer for Florida’s Broward County schools, explained that while her district had already accounted for $30 million from the CARES Act funds, it would appear to federal databases that she had only spent $7 million of that.

Some of the reasons that the spending would not appear yet include:

“I certainly am not sitting on a lot of CARES money,” Marte said, “and I know my colleagues I speak to across the state of Florida are not as well.” The CARES Act gives states and governors until September 2022 to claim and spend these funds.

A New Round Funding for Schools At the Last Minute

In the final days of 2020, a new COVID-19 relief spending bill found bipartisan support. The bill will provide another $54 billion for K-12 schools for costs like protective equipment for safe reopening and managing the hybrid classroom.

New funds for K-12 schools would be delivered primarily through Title I of the Elementary and Secondary Education Act (ESEA) programs. The ESEA provides financial assistance to schools with either a large amount or a large percentage of children in the low-income bracket.

In support of the new education funding, President-elect Biden suggested “We can make it safe for teachers if we invest in what needs to be done, number one, sanitizing the schools, number two, making sure that they have ventilation, number three, making sure there are smaller pods of children, meaning you need more teachers. You've got to pay for this stuff."

OneScreen has remained closely in touch with educators around the world who are striving to give students the best preparation for the new reality. Our leading initiatives include:

GoSafe - Introduced in 2020 to reduce the spread of COVID-19, GoSafe offered schools both touch-free temperature scanners and mask detection capabilities. Looking beyond the current crisis, though, GoSafe incorporated the Qualcomm Snapdragon processor so it could perform many more functions with lightning speed and unmatched accuracy. GoSafe is a full entryway management system with a central console to handle data from multiple network devices and security software to monitor all school entrances and exits. Watch these news reports on how schools everywhere are relying on GoSafe for the year ahead.

Hubware for Education -  OneScreen Hubware is the simple, intuitive, interactive smart screen that helps teachers stay connected with all students no matter where they learn best. Hubware is the 21st century evolution of the traditional blackboard, allowing teachers to project laptops up on the screen for the whole class and access thousands of valuable educational resources online. Educators can send out recorded lessons to anyone who missed the class and immediately transfer class data to the network to reduce paperwork. Hubware, like everything OneScreen offers, comes with unlimited help and training on-demand from our Screen Skills Gurus.

Subscription Pricing - Even though schools want the latest EduTech for their classrooms, funding cycles and amounts can be unpredictable. That’s why OneScreen has sought out advice from educators on a better way to buy. OneScreen as a Subscription allows schools to reduce upfront costs and spread out the purchase over lower monthly payments. This has made technology budget planning easier while delivering the most current smart screen technology to classrooms everywhere. Free hardware and software upgrades over time are included in the monthly cost. Learn more about subscription pricing and the future of buying. 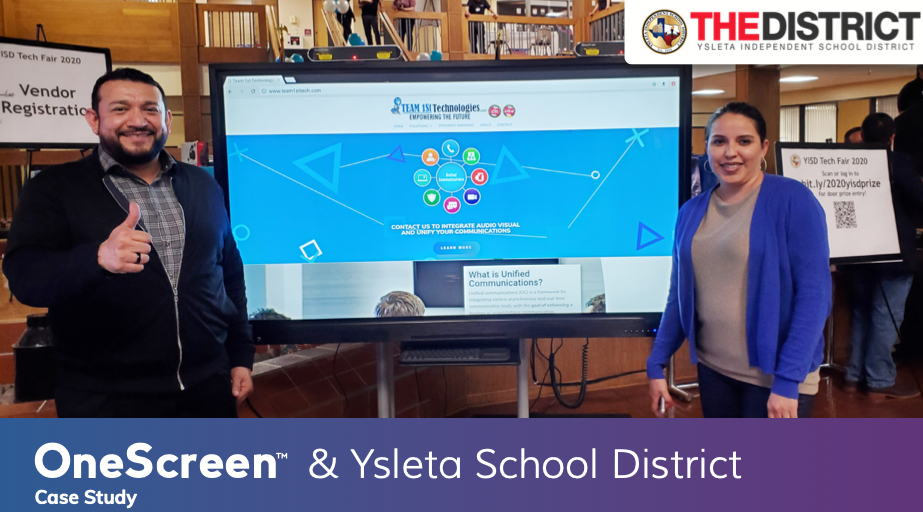 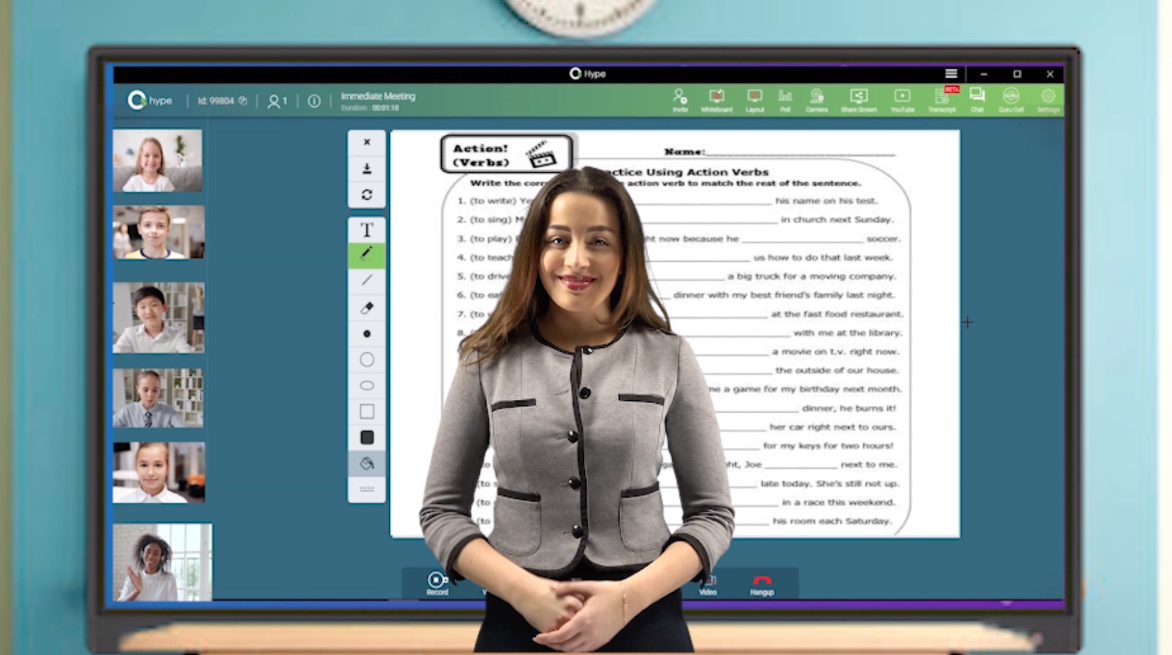 The Top 5 Classroom Technologies That Teachers And Students Love 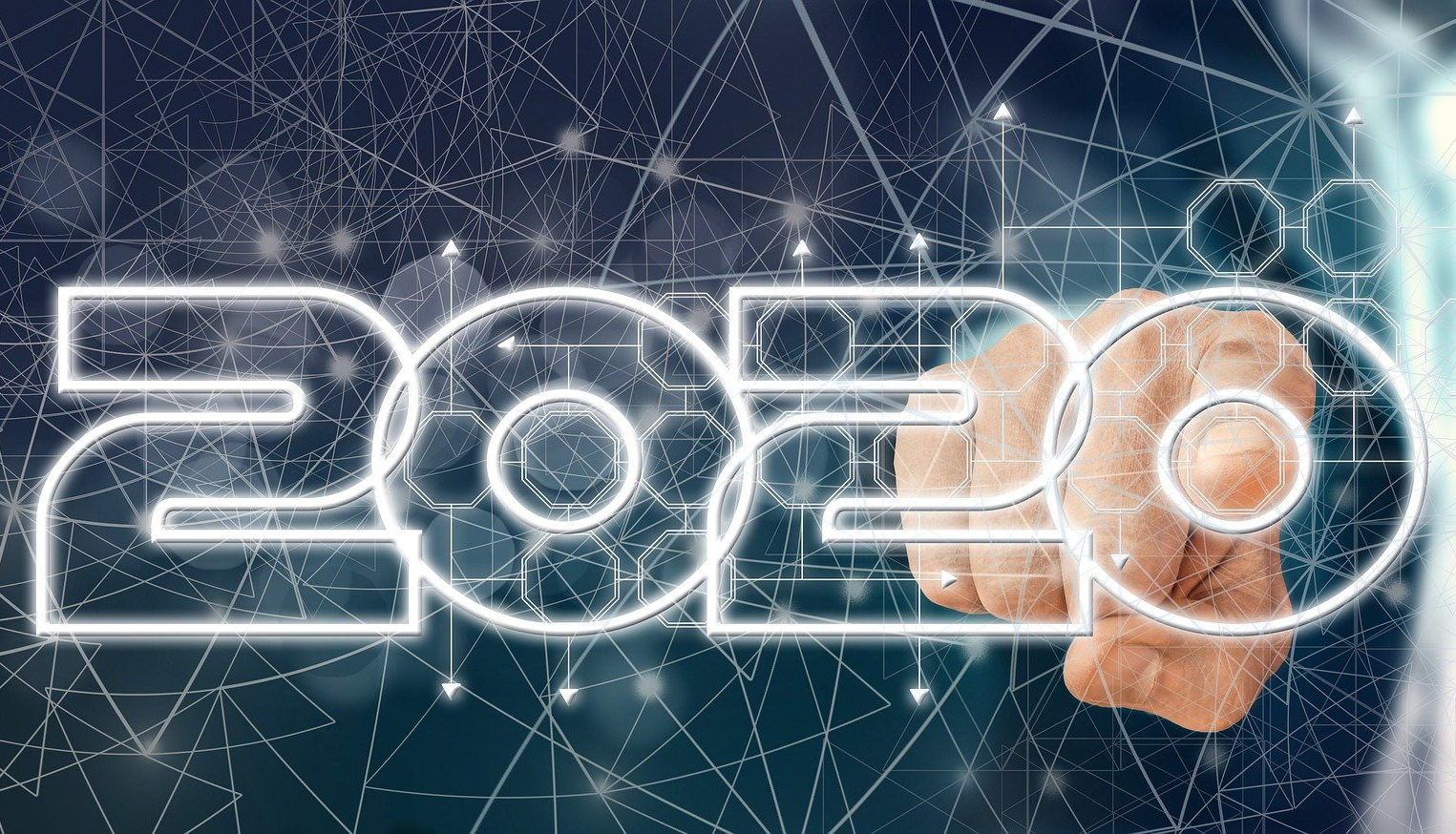 OneScreen 2020 Year in Review: Remote Everything and Education as a Service

Please wait, your call is being connected to the OneScreen Guru.
Demo Hours: 8:00 AM to 5:00 PM IST